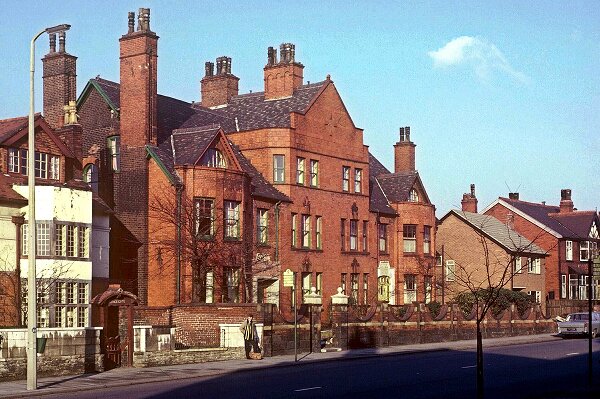 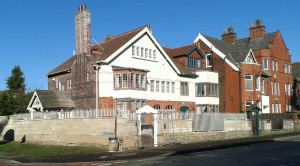 Hillcrest and Briarhill, 37-39 Rochdale Road, Middleton were built by Edgar Wood in 1892 as ‘new art’ town houses, next door to Redcroft and Fencegate, 33-35 Rochdale Road, which were a matching pair of ‘country houses’.

After detailed research by the research group of the Edgar Wood Society for Heritage Trust for the North West, Hillcrest and Briarhill have now been listed grade II, despite their poor condition. They have enormous historical importance as possibly the worlds first art nouveau houses. Edgar Wood’s design was published in the UK, USA and Europe in 1893 and it pre-dates by a year what are generally considered to be the ‘world’s first’ art nouveau designs by Belgium’s Victor Horta and Paul Hankar.

At first sight, Wood’s Hillcrest and Briarhill, Horta’s Hôtel Tassel, Brussels and Hankar’s Maison Hankar, Brussels (both 1893) look three very different designs. However, close inspection shows that they share several design details (not all visible in the photos) and have a similar attenuation of the vertical elements. The common design details are difficult to explain other than  that Wood had probably met Horta and Hankar (who were friends) and they had pooled ideas before expressing them in their own different ways. It is known that Edgar Wood visited Belgium in 1885, so his contact with the pair is a clear possibility.

The design of the door at Briarhill is also similar to Horta’s subsequent elegant flowing art nouveau door designs. The glazing around the door, like the adjacent windows, originally had swirling art nouveau stained glass (arguably the first in the world) which was sadly removed about ten years ago. Now only two tulips survive.

After 1892, Edgar Wood’s work moved in a very different direction to the flowing designs of Victor Horta. As the Arts & Crafts Movement influenced British design more than continental art nouveau. Consequently, Edgar Wood blended the art nouveau of Hillcrest and Briarhill with the rustic vernacular forms of Redcroft & Fencegate, eventually designing masterpieces such as Long Street Methodist Church & School and the First Church of Christ Scientist. Nevertheless, it is fascinating that the highly individual buildings of all three designers appear to have shared a common beginning. 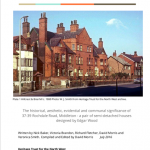 The government’s reasons for listing Hillcrest and Briarhill are…

Architectural interest:
* As an excellent example of innovative design for the period, sharing many characteristics with the most avant-garde designs of the time in continental Europe and anticipating elements of the architect’s later pioneering Modernist design;
* For the good survival of the internal plan-form and retention of many interior decorative features, particularly at Briarhilll;
* For the strong visual and historical relationship with the adjacent pair of Redcroft and Fencegate (NHLE no.
1162377) by the same designer (who lived in Redcroft until 1916), and close proximity and shared features with two of Wood’s other listed buildings at 51-53 Rochdale Road (NHLE no. 1356254), and Arkholme (NHLE
no. 1391983);
Historical interest:
* For their attribution to the internationally-renowned architect Edgar Wood.