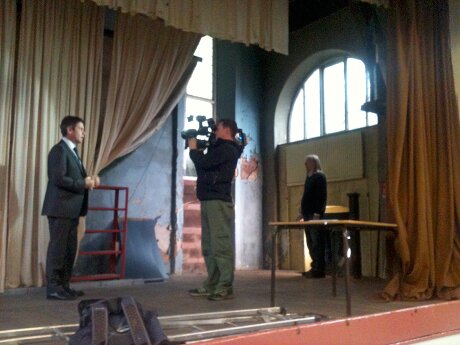 Yesterday was one of those special days…. With just a few hours notice, BBC Radio and TV turned up to film the church and school. Why? Because English Heritage has just added the Long Street buildings to the national Heritage at Risk register, which is updated and published every year. 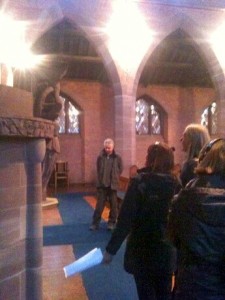 First off, was BBC Radio Manchester and the Allan Beswick morning show – we were on towards the end and at 8.30am a presenter and radio technician came knocking at our door. Nick, David, Nick (from the Council) and Tim (from English Heritage) were there to welcome them and quickly show them around. Michelle, the presenter decided to have a live description from the Lecture Room looking into the garden and then a walk into the church via the vestry. We were all very nervous but they quickly put us at ease and it was a great experience being with such professional media people. 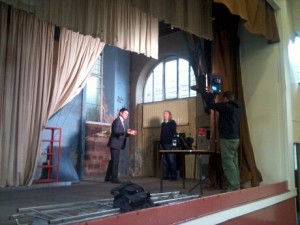 Having relaxed from our radio experience, TV came knocking at our door at 11am with Mark Edwardson, the NW Tonight presenter and cameraman. They wanted to do a slot for NW Today at lunchtime and a longer slot for the early evening NW Tonight. Again, we all gave them a tour round and they quickly got up to speed. They chose the corner of the School Hall stage for the shorter NW Today shoot as there is a good bit a grot there! As this was not live, they did three takes and then disapeared to edit and upload the film, while we had a sandwich or two.

By now, Mair from English Heritage had replaced Tim and it was decided that three of us would be interviewed for the NW Tonight shoot. However, when setting up on the Hall balcony, Mark, the cameraman, got a large carbon fibre spinter in his finger from his tripod. This requires hospital A&E treatment so he had to go off imediately leaving Mark the presenter having to do the whole thing on his own, with a small backup camera he had in his car.

We now experienced BBC professionalism at its best as Mark Edwardson worked out a new 1 minute 45 second shoot in his head and then set-to using his little camera and a tripod.  All the professional tricks came out – off-camera interviewing of Mair and Nick, Mark speaking to the camera on the tripod (he did six takes of the introduction in front of the crumbling wall of the stage), distant shots in the garden of David and Nick and a walk past with David, all blended together with stills of the building and its materials. It was a tour de force of improvisation.