36 Mellalieu Street was Edgar Wood’s first house designed with a concrete flat roof that covered the whole building. It was drawn up in 1906, five years after he had begun experimenting with flat roofs and three years after he had first met J. Henry Sellers and they had begun on their ambitious project to create a new architecture for the new century.

Between 1907 and 1909, Edgar Wood designed similar-looking cubic houses of different sizes and types in Burnley, Heywood, Stafford, Sheffield and Hertfordshire. They were the first modern movement houses in the world and were highly influential.

When 36 Mellalieu Street was built in 1910, Edgar decided to leave off one of the two bay windows he originally planned and to give the detailing a vernacular character. Even so, it was the most modern town house in the country and its cubic form set the style for modern buildings for decades.

36 Mellalieu Street was restored to its original appearance in 2012 as part of the Edgar Wood and Middleton Heritage Initiative. 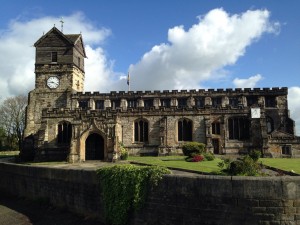 St. Leonard’s or Middleton Parish Church on its hill above the town is by far the oldest building in the area and arguably the oldest in Greater Manchester. It was first established in Saxon times and was a safe haven for the Holy Island monks carrying Lindisfarne Gospels and the coffin of Saint Cuthbert escaping from the marauding Vikings around 880 A.D. The church was rebuilt in Norman times and then again in 1412 by Middleton’s Thomas Langley, Prince Bishop of Durham and Chancellor to Kings Henry IV, V and VI. Bishop Langley somewhat sentimentally retained some of the Norman detailing, notably in the tower arch.  In the early 1500s a clerestory was added which lightened the interior. The Reformation shortly afterwards destroyed much of the interior but several medival features survived, including Langley’s rood and parclose screens, misericords and the famous medieval ‘Flodden Window’. After the turmoil of the 1600s, the Geogians added a series of classical monuments in the 1700s but their balconies were all taken out by the Victorians who undertook sensitive alterations. Finally in the twentieth century, Edgar Wood restored the roof, added a boiler house and set the church on a route of sensitive change which involved installing beautiful stained glass and a choir practice room designed by the Arts & Crafts modernist architect George Pace. St. Leonard’s Church is listed Outstanding Grade I by English Heritage

Queen Elizabeth Grammar School was built in 1586 to replace the chantry school  at St. Leonard’s Church  which was abolished in the Reformation.  When it was built, there was no town of Middleton but a rural township with scattered buildings that spread across north Manchester as far as Bolton. Though one can find Grammar Schools of an earlier date than Middleton’s, we have yet to find an earlier one still with its original buildings. So we think this is the oldest surviving Grammar School in England. If we are wrong, please let us know!

The school had a link-up with Brazenose College, Oxford – students of the school could go onto the college. It was still in use in Victorian times and was the school attended by Edgar Wood – his initials in his characteristic script are scrawled on the walls in the building (something actually encouraged at the time).

The school now has several uses, including as a delightful venue for private receptions and parties.

Edgar Wood and J. Henry Sellers had met up in 1903 and quickly began working on a new type of ‘cubic’ architecture using reinforced concrete and to create buildings not possible with traditional roofs.

Elm Street School (now Elm Wood School) was designed as a ‘Board School’. However, it was radically different to the other schools of this type and is celebrated as a high point of Wood’s and Sellers’ Arts & Crafts modernism. It was one of just a handful of joint designs by the two architects, despite having worked together on the new style. Edgar Wood was extremely busy in 1908 and most likely he asked Sellers to help him with the design which he had recieved after much lobbying of the Middleton Education Committee.

The semicircle is expressed as a concave single-storey limestone façade facing the garden and behind rises an impressive brick school hall with nine round-headed windows and short limestone-capped towers at each end. The height of the hall windows, which makes the interior so bright, is only possible  because flat concrete roofs are used on the surrounding classrooms. The main hall has a fine plaster ceiling decorated with a large rectangle and two semicircles in blue and yellow/orange, the original colours.

Two sides of the garden are enclosed by passageways with semicircular openings, which connect the school entrances to the road and provide shelter for the children. The garden is a safe place for young children to play and, like the garden at Long Street Methodist School, it shows that Edgar Wood wanted children to experience the beauty of nature.

Compare Elm Street School with the Long Street Methodist School? They look completely different yet are based on the same idea of a school set around an Arts & Crafts garden.

Elm Street School is still used as a school today. It has been renamed Elm Wood School in honour of its designer. The buildings are owned by Rochdale Council which, with the school, has carried out conservation work in recent years, including restoring the original windows. 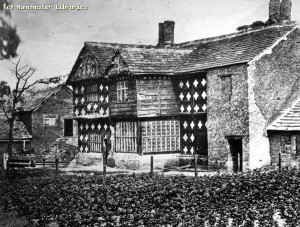 Tonge Hall is generally regarded as one of the finest examples of Tudor architecture in the country and despite a devastating fire in 2007, still retains many of its original features, including carved oak beams,  inglenook fireplaces timber panelling and a wonderful spiral staircase. The building was heroically saved by Heritage Trust for the North West whose contracting arm undertook extremely skilful emergency conservation work after the fire – work beyond the ability of the majority of contractors. 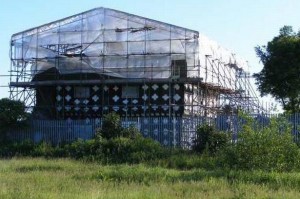 The work was planned and supervised by national conservation expert Alan Gardner who is a great supporter of Middleton’s ‘Golden Cluster’ of buildings. Great credit should also go to English Heritage, which provided the finance and to Rochdale Council which initially secured the site and has now taken over the ownership.  The Society for the Protection of Ancient Buildings has also contributed with money and support as has the local support group, Friends of Middleton View who are pushing for a conservation area. Tonge Hall now sits in a huge scaffold cage supporting and protecting it, while a long term scheme is drawn up by the  Council. Heritage Trust for the North West are keeping an eye on things in the meantime. 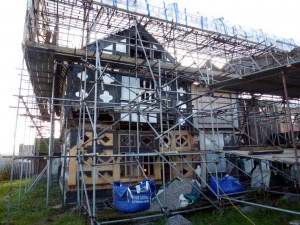 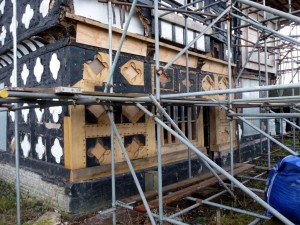 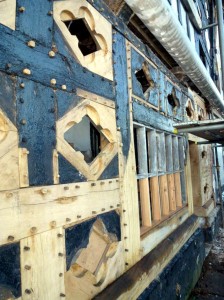 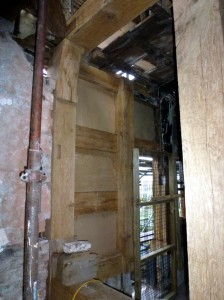 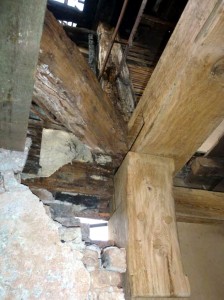 When Redcroft (left) and Fencegate (right) were built in 1891, they were the most modern pair of ‘semis’ in the country. They began a new phase of Arts & Crafts design which reworked the humble features of  farmhouses and cottages into new sophisticated architecture. Edgar Wood’s buildings had been hinting at this vernacular inspired style for several years. The problem was that few wealthy Victorian businessmen wanted their new home to look like a crumbling old cottage! Wood could only introduce a few features here and there so as not to be overruled by his clients.

However, with Redcroft and Fencegate, Edgar was both the client and the designer. He was free to design the house as he wished, save for the views of his supportive father who was paying for it as Edgar and Annie Wood’s wedding present – they were married that year. Edgar and Annie lived at Redcroft while the manager of his father’s mill, Mr. Wiggins, lived at Fencegate.

When building Redcroft, Edgar looked up at the just plastered ceiling and a large piece of wet plaster fell into his face. Plaster is extremely alkaline and he lost an eye in the accident. Had Edgar lost both eyes, his career would have ended immediately and the appearance of buildings fifty years hence might have looked rather different. 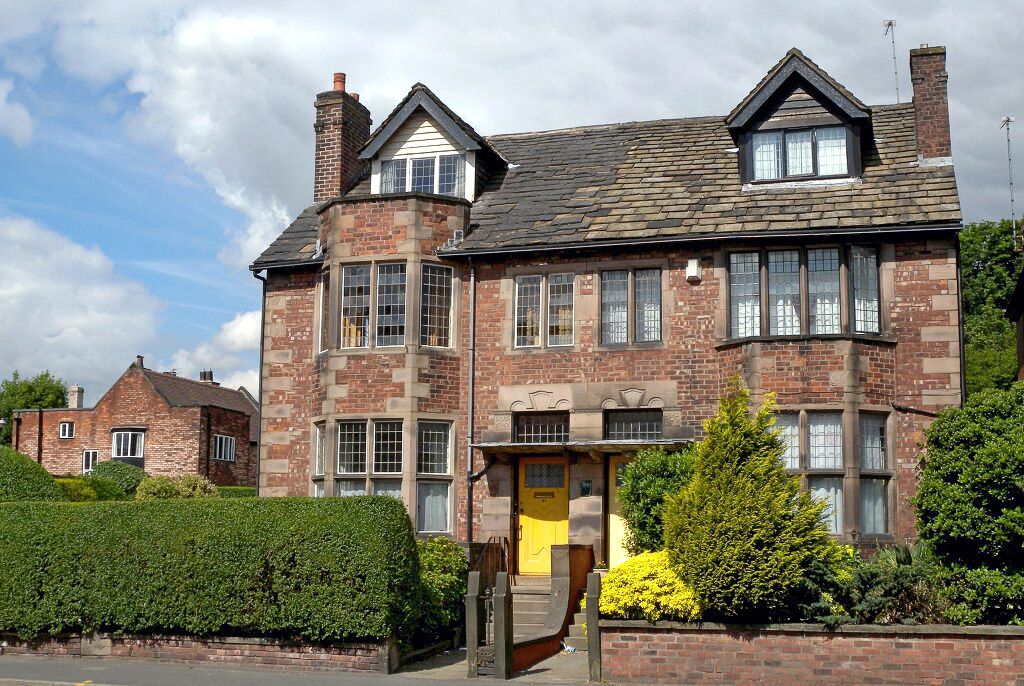 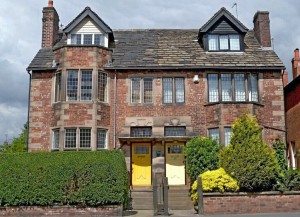 51 & 53 Rochdale Road are well preserved example of Arts and Crafts domestic architecture.  A picturesque quality is obtained through sensitive use of materials rather than irregular form. The form is blocky and efficient, with a grid-like arrangement of elements on the main facade.

Asymmetry is created simply by raising the bay window on the left hand side, so that it breaks the eaves.  Wood’s later designs, for example 36 Mellalieu Street nearby do a similar thing and both are examples of Wood changing his architectural expression from irregular forms to one where materials and formality increasingly play the dominant role. 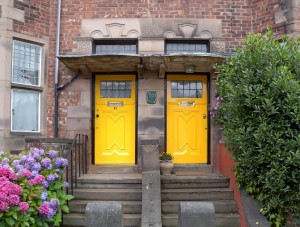 The building is one of the first polite architect-designed house designs to use common bricks to define the front elevation, something which, again, looked towards the future. Another interesting feature is the design of the two front doors, which anticipate Art Deco by some 25 years! 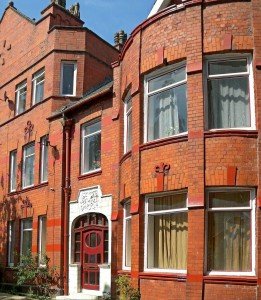 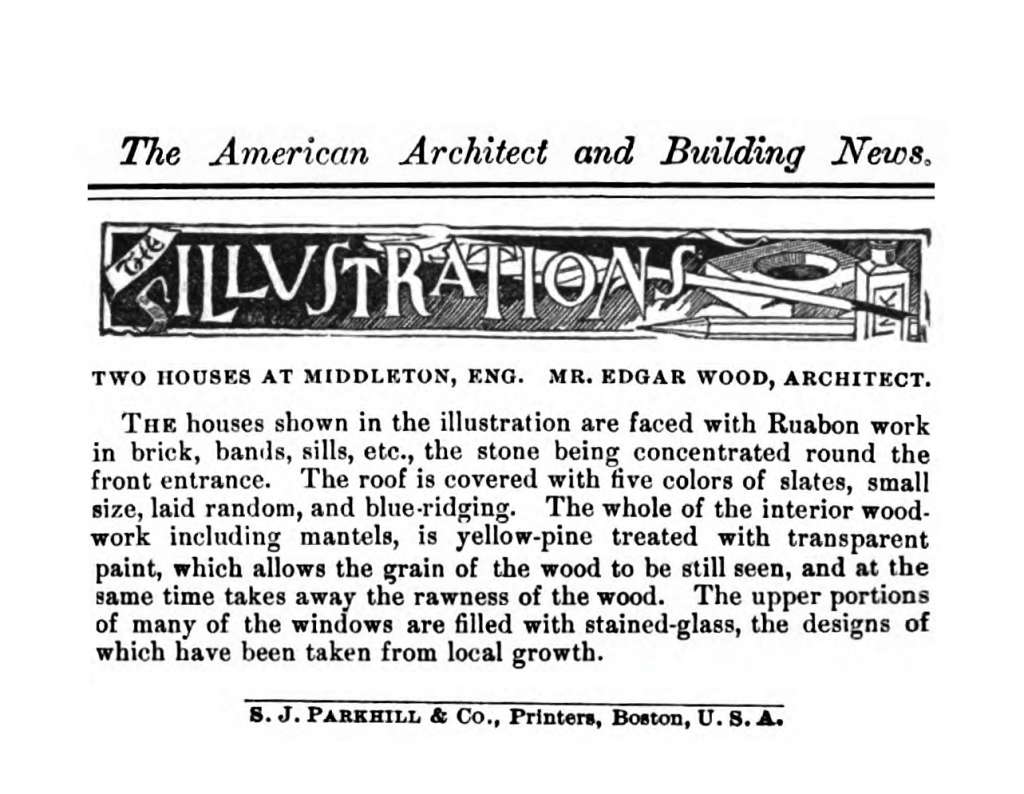